Never Too Young to Start

Tennis is great in terms of health and fitness, and it also develops hand-eye coordination, balance and body coordination. With our Certified Tennis Professionals and world-class facilities, your child will achieve greater physical activity and experience success right from the start. Moreover, tennis nurtures work ethic and discipline for healthy child development. 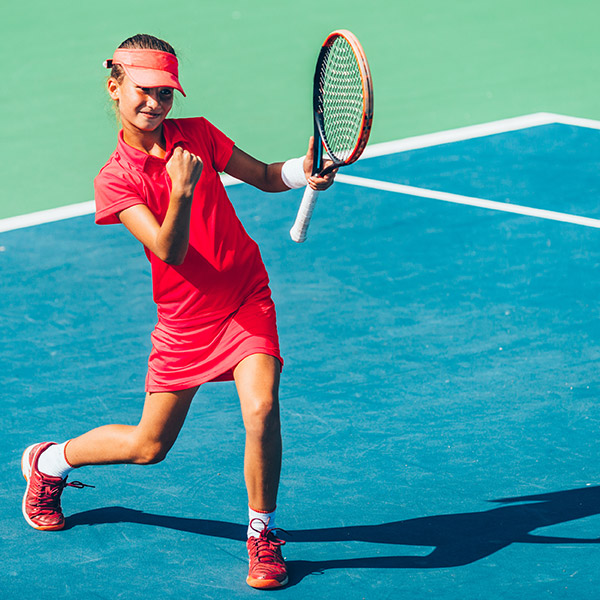 Spare Time offers the best in Junior Tennis Programming for all ages and levels – from Pee Wees and Tots to high school or ranked tournament players, in programs from Red, Orange, Green Ball and Friday Match Play to Junior Team Tennis and USTA/UTR tournaments.

Our world-class, nationally certified Tennis Professionals offer coaching and instruction for all juniors. Private lessons, group clinics, and team formats are available for all levels from beginner to advanced players.

We offer extensive junior tennis programs for kids of all ages and abilities. The Junior Excellence Program is designed for the more serious tennis player who plays tournaments and/or high school tennis. Training includes high energy drills and games. It is the highest level junior tennis training program before reaching the Spare Time Junior Tennis Academy.

For the highest level junior tennis training Spare Time Sports Clubs also offers the Spare Time Junior Tennis Academy. This program maximizes the individual development of highly motivated, accomplished, and competitive junior tennis players to train year around, 5 days a week. We are committed to helping every player unleash their full potential – something our instructors accomplish through their experience and expertise. We offer a free try-out for the serious tennis player ages 11-18 along with family-friendly, multi-child discount.

The mission of the Spare Time Junior Tennis Academy is “To maximize the individual development of the highly motivated, accomplished and competitive junior tennis player.”

In support of this mission, we structured the program to be affordable for Academy Players to attend an unlimited number of sessions, at any location. Further, we provide a family-friendly multi-child discount.

The Academy is held at two convenient locations in the Sacramento area and can be offered rain or shine, utilizing the Spare Time Indoor Tennis Center.

The Spare Time Junior Tennis Academy is a year-round program designed for the serious tennis player to achieve their tennis potential by providing consistent training on a daily basis. Academy training sessions are Monday-Friday at 2 Spare Time Club locations.  Spare Time Sports Club members on the Monthly Unlimited Academy plan can also take advantage of the Spare Time Indoor Tennis Center when other programs cannot run due to rain or inclement weather. The monthly Academy fees are set to encourage consistent year-round participation.

Interested players can contact us to schedule a free try-out session and if accepted by the site Academy Director will be asked to sign and return the registration paperwork which contains all the details of the program, expectations and pricing.  Our Academy program offers the most affordable tennis training option in Northern California.

For more information or to schedule a try-out session please contact Chrys Atkinson at chrysa@sparetimesportsclubs.com.

All new players are issued a Coupon Code to shop a player kit from the Academy Store. The Academy Store has a wide variety of options and is open to everyone to order (players, families, coaches and friends).

Train With The Best!

Most are on tennis and/or academic scholarships. Players training in the Academy have garnered over 30 National junior titles, with some of our star players going on to compete at various levels of the Professional Tour circuits. 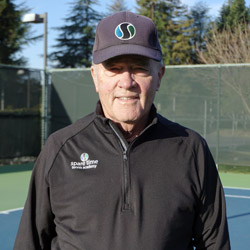 Bill Campbell and his wife, Margie Campbell, are the owners of Spare Time. Bill is also one of the most successful and respected college coaches in the country. He knows most of the coaches in the Western United States and many coaches from other regions of the country. Bill also coached four players who attained pro rankings including one player who won the NCAA Singles Championship while a student at Stanford and later was ranked as high as nineteen in the world on the pro circuit. Also, Margie was an outstanding junior tennis player, is a past President of USTA NorCal and has served on the Strategic Planning Committee for USTA National. 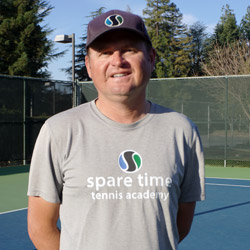 Dima Hrynashka began his coaching career in 1998, where he tutored youth players for three years at the Olympic Center of Belarus. In 2003, he moved on to coaching the 14-under girls and boys national team of Belarus. His time with the national youth teams was highlighted by his girls 14-under team winning the 2003 world championship. At 14 years old, Dima was competing for the Belarus national team, and at age 16, was ranked eighth in Russia's junior class. He was a 4-time Belarus youth doubles champion and won the junior national singles championship when he was 16 years old. At the age of 18, Hrynashka turned pro, but his career ended prematurely with a back injury that forced him to retire. Dima is the Head Coach of the Sacramento State Women's Team and holds an ITF Coaching Certification. 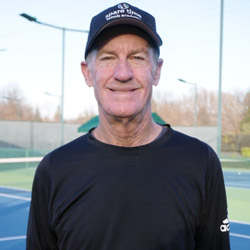 Doug brings over 40 years of experience teaching, coaching and developing talented top level tournament players at the junior, collegiate and professional levels (having coached on pro circuit with Sam Warburg who earned a world ranking under 132 in singles and 120 in doubles).

Doug's certifications and recognition include: USPTA Elite Pro, USTA/USPTA Specialist in Competitive Player Development, USPTA Silver Anniversary Award as NorCal "Top Teacher"; 3 time USPTA Nor Cal "Pro of the Year" and 2 time "Coach of the Year" awards. He was also inducted into the NorCal Sports Association Hall of Fame in 2019.

Doug is a USTA Certified USTA High-Performance Coach and served on the NorCal Coaching Commission. Doug was a top NorCal Junior player in singles & doubles, played collegiate tennis at UC Davis and then on the Satellite Pro Circuit. Doug has written articles and been featured in USTA, USPTA, and SATA publications as well as being a featured speaker at USPTA and other coaching conferences. 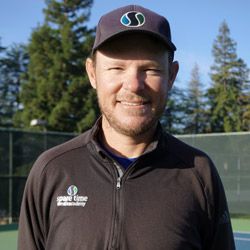 Eric Roberson trained at the Rio Del Oro Junior Academy from age 8 to 18. During that time he maintained a top 2 ranking in Northern California in every age group as well as a top 15 ranking nationally in every age group. He was as high as #2 in the nation in the 14 and under age group and in 2000 he won the Winter Super Nationals where he was awarded a gold ball in singles. He also has won three gold, three silver and three bronze balls in doubles throughout his junior career. In 2004 he signed with Boise State University and played four years of Division I college tennis there. He became an All-Conference player in singles and doubles and helped his team to win three conference championships. His team was ranked as high as 16 in the nation. In the individual college national rankings he was ranked as high 65 in singles and 41 in doubles. His top college win, his senior year, he defeated Pierre Mouillon, the #14 ranked player in the nation from Cal. He graduated in December of 2008 with All-Academic honors and a BS in Psychology. In the fall of 2008 he worked as the volunteer assistant coach for the Boise State Women's team and in the spring of 2012 he is working as the volunteer assistant coach for the Sacramento State Men's team. In the summer of 2007 he helped teach at the Broadstone Junior Tennis Academy and in 2011 he worked as an assistant pro there during the spring and summer. He teamed up with Yasmin Schnack to win the Stead Open two years in a row in 2009 and 2010. In 2011 Yasmin and Eric competed in the US Open Wild Card Playoffs where they went on to win the Northern California Region and became National runners-up. They were only a tie break away from making the main draw of the US Open! 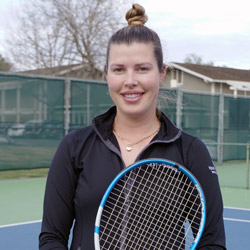 Diamond has over 20 years of playing experience and over 9 years of teaching experience. While a young tennis player in Lithuania she represented her home country in the European Championship in under 14, 16 and 18, and was top 100 in ITF. Upon graduating from high school, she was recruited on a full ride scholarship to attend Sacramento State University where she obtained her Bachelor’s Degree in 2017. After undergraduate studies were complete, Diamond participated on the WTA and Open tour. Diamond reached #1 in Northern California in 2018 and 2019 in Women’s singles. In 2020, she returned to school at Holy Names University on another full athletic scholarship, where she was a top scholar with summa cum laude honors and obtained her MBA at the end of 2021. 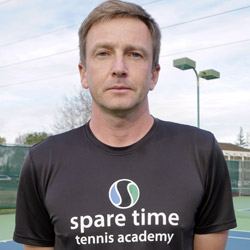 As a junior player, Kiryl won numerous European tournaments in singles and doubles. In 2006, he became National Champion U18 in Belarus (singles). A year later, he signed with California State University, Sacramento (D1) and obtained a full athletic scholarship for all four years. During his college tennis career, he became the winner of the Regional Championship, which allowed him to participate in the Winter Intercollegiate National Championship where he made it to quarter-final. Kiryl’s highest position was #16 in singles and doubles of Intercollegiate Tennis Association Division 1. Also, he was named MVP of Big Sky Conference three years in a row and Senior Student-Athlete of the year at Sacramento State. As a professional tennis player, Kiryl’s highest ranking was #710 in singles and #586 in doubles. As a coach, he has over 12 years of experience teaching juniors of different ages. For the past 8 years, Harbatsuik has a key coach developing players at Spare Time Junior Tennis Academy with multiple players receiving full or partial athletic scholarships at various D1 colleges. 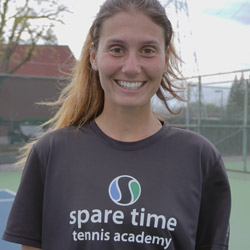 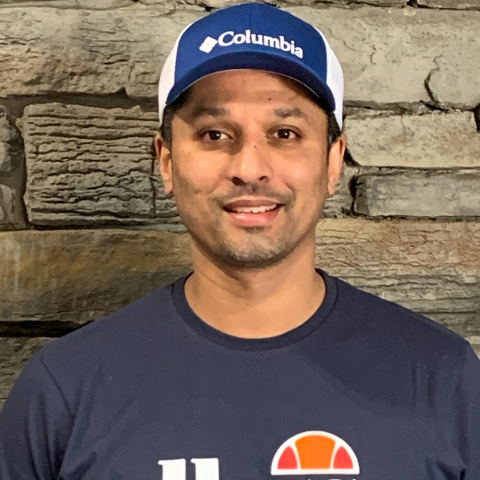 Norm has been coaching Tennis the last 15 years and was ranked 300 in the world in ITF juniors and was also ranked on the ATP Doubles Tour . Norm has coached over 25 junior players who have played Division 1 College Tennis on Tennis scholarships.

Programs and activities vary by location. Please contact the club nearest you for details.

Become a Member
Back to the top